A climber’s paradise, Thakhek hosts a large number of limestone sport routes in a concentrated area. With its ease of access, less humidity than nearby Tonsai, and a efficiently run climbing resort (Green Climber’s Home), Thakhek is becoming a wildy popular Southeast Asia climbing destination.

There might be other ways to get to Thakhek, but the easiest might be to fly to Bangkok and then take a cheap domestic flight to the city of Nakhon Phanom, which is right on the border of Thailand and Laos. Air asia and Scoot both offer cheap flights, but keep in mind, they depart from Bangkok’s smaller airport, Dong Mueang Airport. If arriving to Bangkok’s Suvarnabhumi Airport, you can take a taxi or the free airport shuttle to Dong Mueang Airport. Once you land in Nakhon Phanom, you can take a taxi to the bus station, then find the bus that goes to Thakhek in Laos. You’ll be crossing the border by land and the process is very straightforward, just make sure you have your passport, and cash to pay for the Laos visa. This goes without saying but do some research on whether or not your passport qualifies for a visa on arrival (the USA does). Once you cross over to Laos in the city of Thakhek, you’ll need to pay a tuk tuk to drive you either to the Green Climber’s Home or to the city center of Thakhek. Lot’s of climbers get ripped off here, it should be no more than 100,000 Kip for the ride. Sounds like a lot of work, but if you give yourself a lot of time, it’s not too bad and once you make it and see the roof, you’ll be glad you did. Last but not least, if you plan on climbing at the roof, bringing a kneepad will be a lifesaver. Those kneebars are quite painful without them. 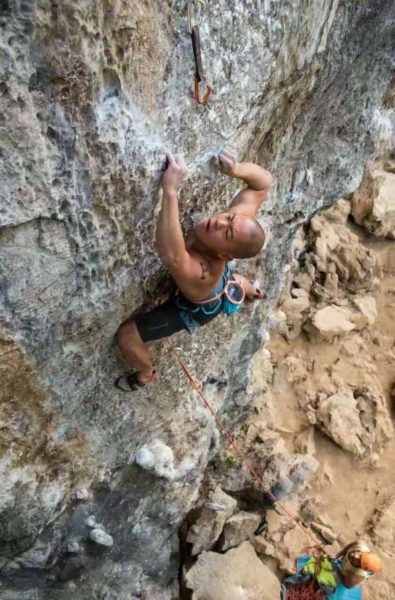 GCH is open October until May, and the best times are probably during winter time, January-March. I was there during the month of February in 2017 and did not have one day of rain. Days were hot but we always climbed in the shade, and at night, temps would drop sometimes to a level where you would want a light hoody.

If you are traveling solo, the Green Climber’s Home is your best bet. It is super easy to meet new friends at this extremely well run resort. Honestly, even if you have a partner, GCH is just so much more convenient than having to rent a scooter every day and commute every day. Not to mention, it’s just much more fun to stay there and meet people from every corner of the globe. The pricing is reasonable for a tent, which is the only viable option if you are dirtbagging long term out there. Though the tent is tiny and the zipper doesn’t work too well, you get used to it quickly. I’m also glad it didn’t rain once in my 30 days out there. Also, Thakhek gets pretty cool at night so sleeping was comfortable.

GCH has water to drink

One of the only downsides of stay at GCH is that their restaurant is your only real option for every meal. Though it is just a little bit higher priced than in town, I found the food to be well made and quite reasonably priced. It’s just after 30 days, I got sick of eating the same things every day. You likely won’t have this problem with a shorter stay, as there really are a lot of menu options.

Great clean showers at GCH but can get backed up around sundown when most climbers head back from the crags to shower before dinner.

You can do the Thakhek Loop on a motorbike, which takes about 3 days. You can hitchhike into town for a change of scenery and dining options. You can run to swimming hole a few kilometers away. The staff at GCH are very helpful and can show you everything you need to know to get there.