For most climbers, Yangshuo is the reason you came to China. Surely you’ve seen pictures somewhere of the gigantic, looming arch sitting atop Moon Hill, or heard stories of Todd Skinner venturing into the boonies of China to introduce sport climbing here in the early 90’s. Yangshuo is a totally different world from those days, but remains a paradise for adventurous climbers who want to test their skills and strength at China’s most famous climbing destination.

Getting to Yangshuo is not too difficult compared to other areas of China, as it is a popular tourist destination particularly among foreigners. The easiest option is to fly into the city of Guilin, and then from the airport you can take a bus directly to Yangshuo. This is by far the best option and even worth paying a bit more for.

The other option is to fly to Guangzhou, a bigger city with normally cheaper flights. However, you’ll need to make your way from the airport to the train station, and then buy a (preferably high-speed train) ticket to Yangshuo. This is certainly doable and even a fun adventure if you haven’t yet ridden on China’s high speed train (GaoTie), but may be difficult for first timers and non-Chinese speakers, as train stations in China are all in Chinese.

Either way, once you make it to Yangshuo, you’re pretty much all set, as the area is somewhat of a bubble of Western culture in comparison to other parts of rural China. You’ll need some wheels to get around and depending on how long you stay, you can rent from most hostels, or buy a scooter and try to sell it when you leave. Renting is about 50rmb per day, and you can buy a working scooter for about 600-800rmb, which is about $100. Another quite reasonable option is to bike to the crags, which vary from 5-15km from town, and finding a bike to rent will be fairly easy. 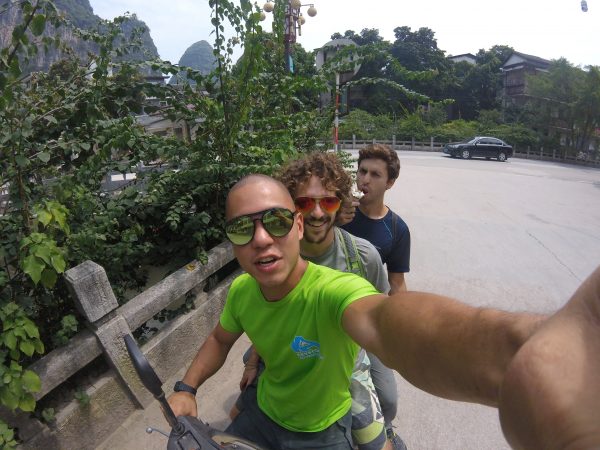 A 70-meter rope will suit you better here, as some of the routes are quite long. Don’t despair though, the route Yangshuo Hotel at White Mountain crag will in itself make lugging that 70 all the way here worth it.

Spring and fall and sometimes winter. Summer is hot and humid, really quite unpleasant. Still, not a dealbreaker if you’re tough enough. Winter can be hit or miss. If it’s raining, you’re pretty screwed, there are not many crags that stay dry, and even if there were, you still need to travel by scooter to get there and if you don’t crash, you’ll be soaked anyway. 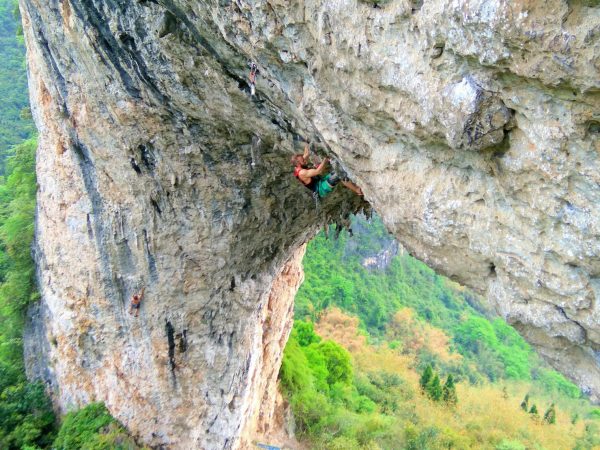 Many others at easier and harder difficulty, these are just a sampling of the ones we were able to get on.

Forget camping here, Yangshuo is all about the cheap hostels. Beds start at about 20 rmb per day, about $3. If you are traveling solo, the best option is the Climber’s Inn because you have the highest probability of finding a partner there.

If you already have your partner, Sudder Street is a much newer and higher quality hostel and a bit outside the hustle and bustle in town. All hostels can be found easily using the Ctrip or booking.com app. Qunar is another great app if you can read Chinese or have a friend who can. I’ve heard of some people paying $50/night for a hotel here, which is probably a rip-off, unless they had a gold-plated bidet in their bathroom.

Bottled water can be found at the many convenience stores around town, and most hostels have electric water heaters to boil water if you want to reduce plastic usage.

Lots and lots of food options in Yangshuo, and most are good. You’ll figure it out. There’s even a McDonald’s for when things get desperate.

Inside the hostels duh. You could probably also convince a farmer to spray you down with a hose.

Yangshuo has some great non-climbing options for those inevitable rests days you’ll need after your skin gets shredded by the limestone. The whole area is a vast landscape of karst mountains that lends itself well to cycling, and there are a few places in town to rent a bike, road or mountain.

There is a ping-pong table in the basement of the Tai-Chi school (see map) that is open most days until about 10pm, but beware, unless you’re good, you may get challenged and subsequently humbled by some old Chinese men here. It’s worth coming just for that experience.

Several times I saw climbers setting up slacklines in Yangshuo park, next to the rotary in the middle of town.

Running up the steep hill to the TV tower to watch the sunrise or sunset is said to be a good challenge and a view that’s worth it.

XingPing, the location of the picture on the back of the Chinese 20 Yuan bill, is a short 45 minute bus ride north from Yangshuo, and worth spending a day to make the visit.

Last but not least, hiking to the top of Moon Hill is a fun time: 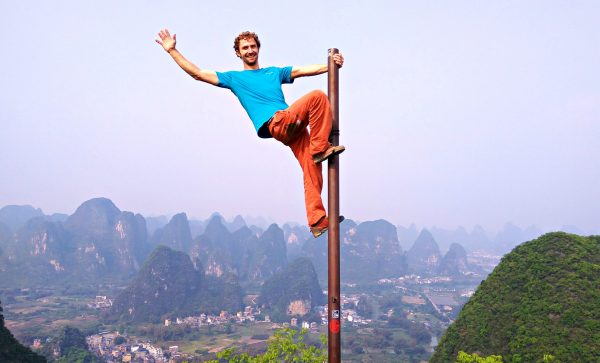