I went on a nine month climbing road trip from July 2017 to April 2018, traveling 20,000 miles. Thought it would be interesting to keep track of as much as I could, so here we go.

Gas certainly seemed like the biggest expense during the trip. The tank on my 2006 Ford E-150 is 35 gallons, so every time I filled it up, I was looking at like 70 to 80 bucks each time.

In the end, over the course of those nine months, I drove 20,000 miles and spent about $3,000 on gas (mpg was about 17 and average cost of gas was about $2.5/gallon). This comes out to be about $333/month, which if you view as rent, doesn’t seem that bad. Not to mention, when Mike and then Lukas came to live with me, that would drop by half.

I actually just sold my van (September 2018) which sometimes I still cry over, but the only thing that makes it ok is looking forward to building the next one which I’m thinking will be a Transit Connect or something similar with MPG in the 25 range.

Let’s say I bought one of those for this last trip, I would have saved $1000. It’s not just the savings though, sort of surprisingly, I think I would prefer the smaller van. I really only ever slept inside the van, didn’t need all that space. It would be much nicer to park in the city too. Something to think about.

So I did not sort between groceries and restaurants, mostly because I mainly only went to Mcdonalds and I didn’t really want to know extra mcdetails about that.

Over nine months, I spent a total of almost exactly $2000 on food, or about $222/month. That seems about right, $50 a week on groceries/Mcdonalds I mean salads.

I actually didn’t tell anyone about this for a while because it was embarrassing, but I discovered the Mcdonalds app which gives you coupons. One such coupon was any sandwich, including their giant double quarter pounder, for a dollar. And this coupon regenerated every day for some reason. This is why I cannot look into my Mcdonalds financials. I just rather not know. Like in the Matrix.

Lukas is from Germany and he flew in from Morocco to come live with me after Christmas. I helped him buy his phone about a year before that, in Hong Kong. His Hong Kong phone did not support the American Mcdonalds app. He was furious having to buy his big mac meals for 10x what I paid. Alright that’s enough about Mcdonalds.

Groceries were spent mainly on things like thin spaghetti (cooks faster), mac and cheese, ramen, instant rice, fruits, veggies, cheese, tuna, gross meat that you don’t need to refrigerate like hotdogs, summer sausages, things like that. I never had a fridge or used ice, so I only bought raw meat in the dead of winter in Bishop, which still had highs in the 60s (lows in the 30s).

Lastly, I don’t drink, which would increase your food costs. Something to factor in.

Other expense that didn’t fall into these categories were things like the $400 speeding ticket in California, subsequent driving school tuition, overnight camping permits, the national parks pass, a micro traxion for when no one would climb with me, etc.

The best part of flying home in the middle of my trip, besides at least getting to see my dogs, was resupplying my clothing inventory. I was literally wearing my cotton t-shirts to shreds. Pants wore out even faster, especially at the knees. I ended learning to save my climbing pants for long days in the mountains, and use jeans from high school for bouldering or sport climbing. I don’t know, It’s hard to explain, but I love the feeling of wearing something out until it’s destroyed.

Man I was so lucky to not have any issues at all with my van. I remember buying it for $3,500 expecting it to fall apart on me. I just started driving it, hoping for the best. Every time I turned the engine I would cringe and think it wouldn’t start, but every time it did. I spent $1,000 to convert it to a camper van, drove 20,000 miles and then sold it for $5,000, a year later. I think I got pretty lucky! 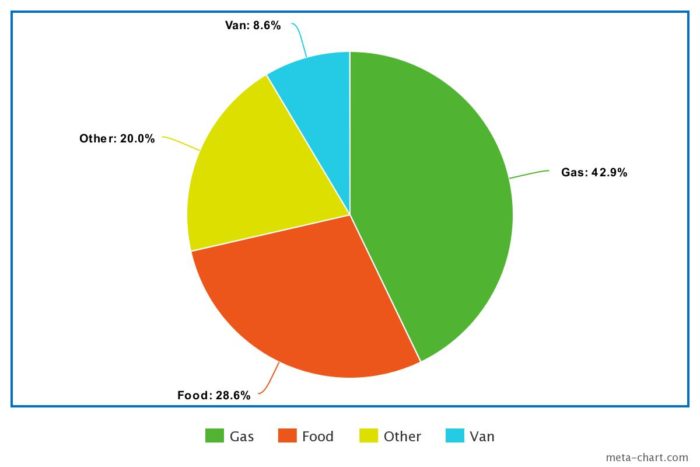 Since I forgot to include things like cell phone plans, car insurance, and I’m sure more, round that up to an even $1000/month and you got yourself a pretty decent idea of what it would cost you per month to go on a climbing road trip living in your vehicle.